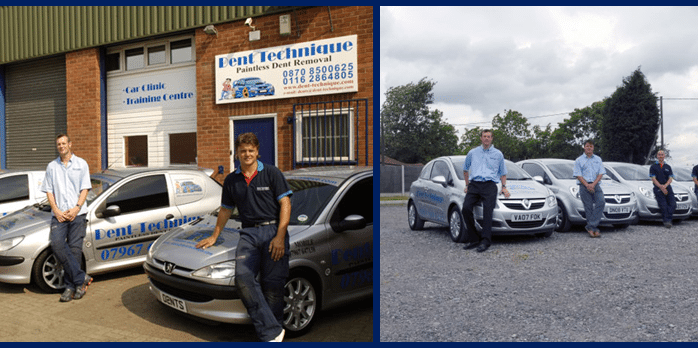 This month Dent Technique celebrate fifteen years with Gareth Truby.  We truly value his 15 years of service in paintless dent repair at Dent Technique and wanted to share his superb achievement with you all.

Gareth joined Dent Technique in October 2001 and is now celebrating 15 years of service with us in October 2016 – How time has flown by.

Gareth is a pleasure to work with and we would like to take this opportunity to thank and commend him for his continued loyalty and support to the company.

He is a superb dent repair technician and we know that customers will share in our thanks and celebrations in the service Gareth has provided during these past 15 years and continues to give on behalf of Dent Technique.

In order to put together this blog as just one way to celebrate and thank Gareth for his 15 years of service with us, Tall Paul has been sifting through a number of photos to select a few to feature.

It is just phenomenal how much the business has changed during Gareth’s time with us and it is great to know that Gareth is a part of it all too.  It always has and will continue to be appreciated by Paul and the team here at Dent Technique.

Just as an example of Dent Technique’s evolution as a business, here is how our vans have changed throughout the past 15 years.  They have all been driven and looked after by Gareth too.

He is not only a truly valued member of the Dent Technique team he is also a great friend.  We are a strong team that work hard together, but also enjoy many social occasions – It is the only way to be.

Gareth, thank you so much for your continued service to Dent Technique – Here is to the future and many more years as a team here at Dent Technique.