Parking Dent Repair Scams, will this come to the UK??

You are here:
Dent removal News 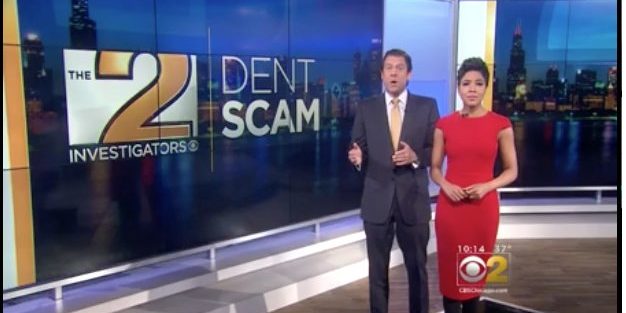 Read this on a USA news site, be aware folks

There’s a new scam popping up in the area: repairmen roaming store parking lots, offering to fix your car on the cheap.

The work ends up costing consumers much more in the long run, 2 Investigator Pam Zekman reports.

Imagine having your car repaired in a parking lot for a bargain basement price. Too good to be true?

“It’s embarrassing that I got duped, that I was taken advantage of,” Belinda Lutz says.

Still, she wants to warn people about this new scam.

“I was loading my trunk and two men approached me,” Lutz recalls.

It was the parking lot of a west-suburban Home Depot.  Two men who claimed to work at a nearby car dealership offered to fix a dent in Lutz’s car right in the parking lot.

“They popped out the dent and it looked fantastic,” Lutz said.

So, Lutz paid the men $300 to paint the dent and another $100 to fix her broken grill — significantly less than the $1,000 estimate she had previously received to fix the damage.

“They put on rubbing compound on a wet surface, and so it just like bonded to that wet surface,” Lutz says.

She was unable to buff out the compound, which ruined the finish on her car’s fender.

There are numerous complaints about this type of scam online. Workers at the Maaco body shop on West Harrison in Chicago say it’s a rip off they see on a regular basis.

The owner of the shop, Paul Oushana, says this can be a very profitable scam.

“Oh yeah, absolutely,” says Oushana.  “I mean they probably talk a goodgame and they basically tell the customers what they want to hear.”

Oushana’s shop fixed the damage done to Lutz’s car for $500.

“I would definitely think twice before committing to someone repairing your car in a parking lot who you don’t know,” he advises.

Belinda Lutz still had the telephone number of the man she met in the parking lot, so she called him back with Zekman on the line.

“Well I’m sorry she feel that way,” the man said when told of Lutz’s complaint. “I can’t imagine why I would do that.”

Lutz, who is a teacher, says she is chalking the whole thing up to a learning experience.

“There are no short cuts,” she says. “I wasn’t cautious enough, so I guess that’s my lesson.”

This parking lot scheme has been a problem in other parts of the country for some time, but has now made its way the Chicago area. Experts say do NOT do business with someone who approaches you in a parking lot.